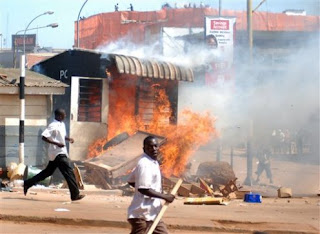 Sporadic clashes between security forces and demonstrators have erupted across Kampala and its suburbs as rioters protest what they say was the inhumane and violent manner in which opposition leader, Dr Kizza Besigye was arrested yesterday and the rising cost of living.
Gunshots are said to be ringing from different neighborhoods across the city. People who had come into the city centre for work or business are fleeing back home as police and the military take over streets with armoured vehicles. The city centre is deserted. Heavily armed units from the Special Forces Group otherwise referred to as the  (Presidential Guard) are patrolling the streets. Risdel Kasasira is a journalist with the daily monitor newspaper based in Kampala. He described the situation in Kampala.
First Son Lt. Col. Kainerugaba Muhoozi, the commander of the Special Forces Group, is said to have taken command of operations at Kisekka Market in downtown Kampala, one of the bloody scenes. One person has been confirmed dead and several have been injured and taken to various city hospitals. In Mbale town, some 300km east of the capital, military and police personnel are said to be firing live ammunition and tear gas as they engage demonstrators. Shops have been locked, demonstrators are fighting back with stones and bonfires have been lit in some streets.
Protests against rising fuel and commodity prices are in a fifth week while Dr. Besigye has been arrested four times and later released in the past three weeks.
Latest videos from Kampala
Posted by CFM at 5:59 AM